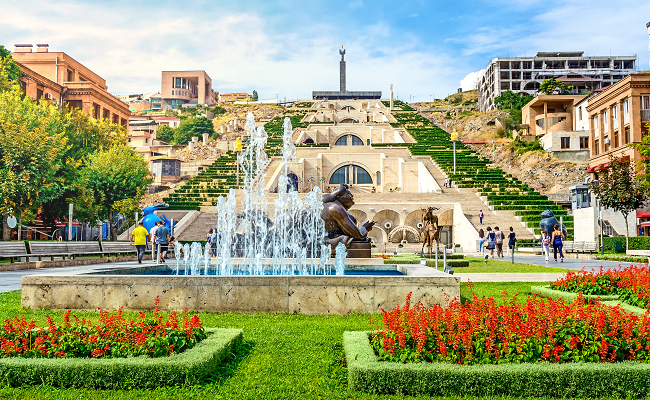 Why Armenia?
Few nations are gifted with history as ancient, complex and unique and culture as rich and resilient as tiny country of Armenia – ancient and mystical land, still unspoiled by the overflowing mass tourism. The destination promises travel as rewarding as revelatory with its intriguing history, antique monuments, breathtaking landscape and charming culture and locals. Unlike many popular touristic sites, Armenia is equipped with everything traveler might be looking for – be a fan of rolling hills or lover of traipsing over snow-capped peaks.

Captivating History of Armenia
What stands as modern day Armenian nation has extraordinary collection of historical sights scattered across the country. The first state in the Armenian highlands dating back to 8-9 centuries BC, calling themselves Urartians, played a major role in the development of the neighboring nations, including Georgia in the north, Azerbaijan in the east, Iran in the South and Turkey in west and southwest. Having its own unique alphabet has helped promote common Armenian identity since it came into use in 405 CE.

Natural Treasures
Armenia knows no limits in terms of natural diversity of the landscape and stunning sceneries that leave every viewer speechless. The list of heavenly wonders goes infinite with blooming Ararat valley, gigantic summits of Mount Aragats covered in alpine meadows, marvelous mountain lake Sevan, breezy forests of Dilijan and Jemuk, dramatic sceneries of volcanic highlands, basalt rock formations in the canyons of Azt and Arpa rivers, so called “Symphony of Stones” and much more than a man’s imagination can handle.

Yerevan – Masterpiece of Contradictions
Yerevan is a city with 3000 years of history, formed decades earlier than Rome and nicknamed as a world’s only “pink” capital due to pink type of tufa; the city full of narrow, graceful streets with elegant houses from 19th century with carved stone and cozy balconies. You can explore last minute release of Mercedes sedans sharing the road with Ladas from museum collection, traditional taverns serving barbeque meats and fruit vodka placed just next to chic European wine bars, and street fashion ranging from hipster to high-class with many wonderful variations in between them.

Time-proof and Glorious Cuisine
Armenian cuisine has stood the test of time for two millennia, recipes passed on from generation to generation and the signature of specialties become a treasured family secret. It is a place where chefs conjure in the kitchen by keeping to traditional recipes, interpreting or even boldly experimenting with old ones. Locals also take pride in the local production of drinks such as brandy, wine and oghi (Armenian Vodka), due to its taste, quality and long history of 6100 years in winemaking.

Authentic Flavor of Armenian culture
Armenian culture is a rich mixture of flavors, colors, outside influences and things that are uniquely Armenian. Special cultural influence goes to pagan empires that ruled vast swaths of land in the centuries before Christ (Armenia was the first nation to officially adopt Christianity, in 301 CE). From the architecture to applied arts, performing arts to literature, its culture represents the history, lifestyle, aspirations, and beauty of this unique country.